The Eight Limbs of Yoga Widely known among all of Mother India’s wide expanse of spiritual systems, Patanjala, the Eight-Limbed Yoga – also known as Raja Yoga and Ashtanga Yoga – represents the very essence of the art of spiritual practice for the many aspiring souls seeking Truth. Beginning with the five Yamas and five Niyamas, which are so often and mistakenly overlooked by novitiate practitioners seeking to experiment with the practices of hatha and asana alone, the path of authentic Yoga is laid out as its founder, Lord Patanjali, envisioned it – all the way to the top of the tree where the branches of mankind’s highest Consciousness shine in the scintillating sun of Nondual Awareness. 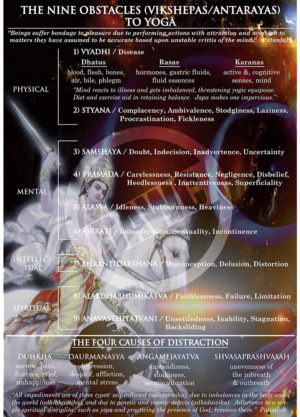 Yoga as union with Divine Reality is consummate and final. But how few beings in the physical realm and body actually experience such unity? Therefore, here on earth, Yoga as method and practice is extremely precious, and the practitioner ought to be well informed as to what obstacles are going to come up once this highest and best of purifying systems is initiated and adhered to. Patanjali has formulated these main impediments into four categories, making it clear as to where the seeker must look and concentrate.
$75.00 Add to cart 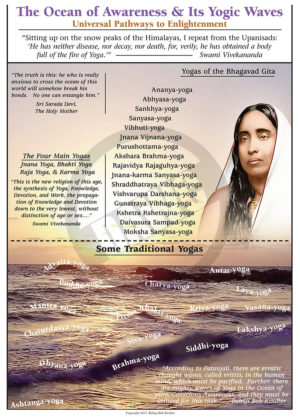 The Ocean of Awareness & Its Yogic Waves #105

Yoga, like absolute Freedom, is a state, not a practice. One does not arrive at it; one abides in it. There are many ways in which to abide in Yoga, all of them modes more than methods. And in fact, as is demonstrated by the names of the eighteen chapters of the Bhagavad Gita, every act and expression in life is a type of yoga for the realized soul. Finding this out, the wise practitioner — instead of trying to follow this path or that way — begins to select the kind of yoga he or she wants to live in each day, and that manifests what is needed for spiritual life and expresses the soul’s inner, divine traits. Thus is Yoga “natural Union with Divine Reality,” as Patanjali, the Father of Yoga, declares.
$125.00 Add to cart 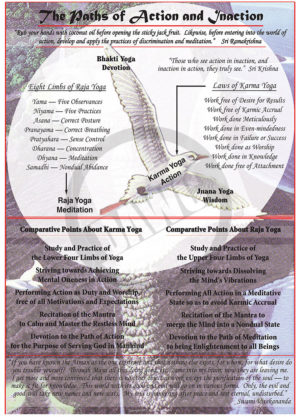 The Paths of Action and Inaction #67

Connecting well with charts #35 and 66, and coursing even deeper into their manifold ramifications, the yogas of karma and raja are inspected here — a pair of pathways that have quite often and for ages been looked at as contradictory to one another — even by intelligent beings within religious circles and traditions. However, to act in accordance and agreement with one’s own purified mind and intellect is the result of successfully fusing these two great yogas, and the fruit of such an accomplishment is the ability to simultaneously concentrate on the formless Essence of Reality while remaining fully able and masterful at acting in the world — the benefits of which bring about the highest good of living beings on all levels of awareness.
$75.00 Add to cart 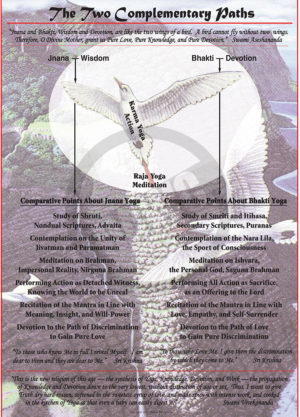 In conjunction with chart #35, this examination of the four classic yogas focuses in upon what certain moire sagacious luminaries of this day and age are referring to as “the two wings of the bird.” They are jnana and bhakti, or spiritual wisdom and heartfelt devotion. The comparative points are given herein with the intention of encouraging their proper synthesis into sadhana, rather than positing one against the other. As Swami Vivekananda has stated, his vision of the fully matured spiritual being of the future involves duly leaving behind the limits and even narrowness, of adhering to only one element of spirituality, and thereafter taking up all four sides of human character — the studious, the devotional, the contemplative, and the active — for refinement. This is proper synthesis of the Four Yogas.
$75.00 Add to cart