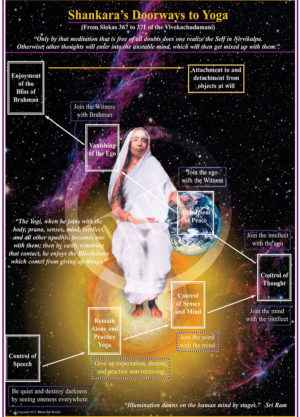 Many seers and systems of finding truth have begun transmitting their teachings with the simple instruction of “be still” and “remain quiet.” The great seer and advaitist, Shankaracharya, interprets the initial qualification for the practice of Yoga in this same way, going on to introduce and unlock the secrets behind each successive doorway to the highest Truth. The eight-limbed system of Yoga has never been quite the same since this illumined Vedantist got ahold of it and filled it out.
$75.00 Add to cart 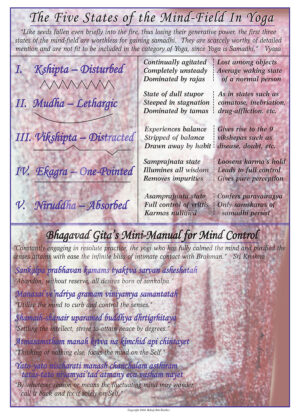 Five States of the Mind-Field in Yoga #210

Lord Patanjali, revered by all of India and around the world, has given this prime teaching in the Yoga sutras. It is a directive that can help everyone, whether they believe in God or not, and whatever their religious preference may be. To know, and then study the five states of the mind, is tantamount to coming to know the mind, thus beginning to turn it into a friend rather than an enemy. With lethargy and restlessness done away with by yogic practices, the real point of life and living can then take up all of our time — as we learn to fully identify with our true Self and live in harmony with all other beings.
$75.00 Add to cart 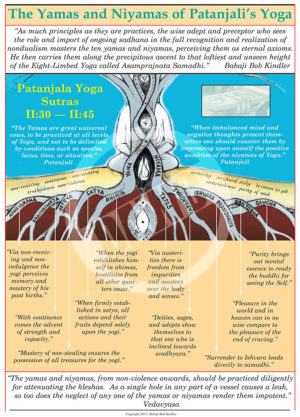 The Yamas and Niyamas of Patanjali’s Yoga #58

Of greatest import, and mostly overlooked by general practitioners of physical yoga today, these ten principles of authentic Yoga are to be well-studied and practiced even before the aspirant sits in asana or practices breathing exercises. The lack of doing so, i.e., becoming nonviolent, truthful, nonattached, pure, studious, etc, rises up in early the individual’s sadhana as distraction, imbalance of mind, lack of control, betrayal of the path, and other unsavory manifestations. With the yamas and niyamas well learned and implemented, the seeker of Truth can climb the higher branches of the Tree of Yoga without fear of falling or failing.
$75.00 Add to cart 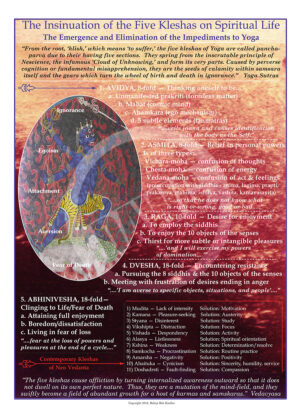 Insinuation of the Five Kleshas in Spiritual Life #209

In Patanjali’s authentic Yoga, the seer gives us his short list of the most detrimental impediments that stand in the way of following and attaining to Yoga — Union with Reality. These are the five kleshas, interpreted later by the Father of Vedanta as five hells in which the ignorant minds dwells. Thus, heaven is not up in space, and hell is not down under the ground; they both reside in the human mind. Taking to certain yogic disciplines advised by Patanjali is the way out of hell. It is also the way beyond heaven to blissful transcendence. Putting the five kleshas down and systematically climbing the eight limbs of the eternal tree is all that separates the soul from realization.
$75.00 Add to cart