Skip to Main Content
Back to Yoga
View cart “The Two Complementary Paths #66” has been added to your cart. 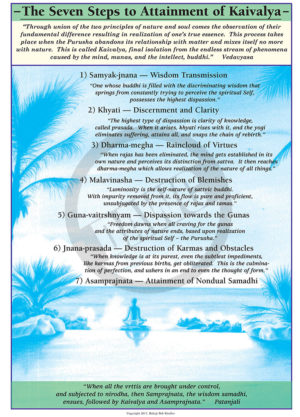 The Seven Steps to Attainment of Kaivalya #87

The superlative word, Kaivalya, is rarely heard in yogic circles today. Words such as asana and pranayama abound among the uninitiated attached to body and breath, but the elevated state of penultimate samadhi is left unplumbed, overlooked. But the fathers of both Yoga and Vedanta focus in on this word, knowing, as they do, that any soul who attains to the higher limbs of Ashtanga Yoga will have to deal with its subtleties and gain mastery of it. As this chart demonstrates, Kaivalya is the doorway to Formlessness — or seven doorways, as the case may be. These openings represent the best of the Yoga darshana, and what mastery of all of the previous limbs is all about.
$75.00 Add to cart 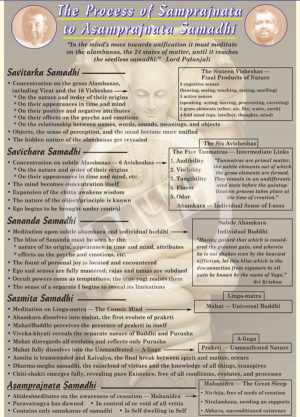 It could be said that the four kinds of samadhis (along with their nirvitarka and nirvichara subdivisions) are like postures for the mind, like asanas for intelligence. The purpose for engaging in physical postures and breathing exercises all along the early trajectory of yogic practice was only to help prepare the way for these higher positions of Awareness. It has been stated by certain luminaries that spiritual life does not really even begin until the seeded samadhis are gained by way of direct experience; everything previous to this highest attainment only signified various types of purification. If this is true, then seeded samadhis can be viewed as similar preparation and purification for Ultimate Samadhi — of which there is only one, of unseeded nature
$75.00 Add to cart 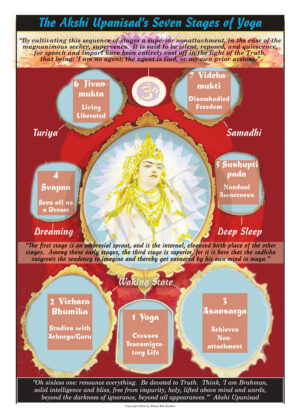 A rare and still somewhat secret Upanisad in this age, the Akshi Upanisad exists, awaiting discovery by intrepid spiritual travelers. Few beings have come across it and studied in this day and age. Within the Akshi Upanisad is a system of Yoga that sports 7 limbs, a precious gem of the Vedanta which can inform and lead the sincere aspirant up and out of the worlds of transmigration and into the Light of Freedom. This wsidom chart will help the seeker of Truth to locate it for scrutiny, which is best accomplished in company with an illumined preceptor.
$75.00 Add to cart 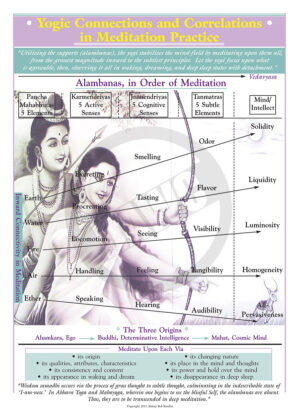 This chart could easily be filed under the heading “Yoga 101,” to coin a phrase, for living beings — especially those who are practicing physical postures in place of Yoga — are missing these fundamental connections. To find the real origins of things in the outer universe, one needs to trace them to their corollary predecessors, which for earth, for example, would be the sense of smell, and for water, the sense of taste. That would make the origin for fire, sight, etc. Following the trail for outer effects to their internal causes in this manner, and meditating upon these connections, reveals the true internal nature of everything in the worlds of name and form. This process, as a practice, can take the soul all the way to the unoriginated Source, or Atman. Following time back in history, as in evolution, or heaven upward into the skies, will not lead to the Source.
$75.00 Add to cart