In all of Mother India’s host of teachings, scriptures, stories, and darshanas, there is hardly a more notable personage appearing among them as King Janaka. This is because, as Sri Ramakrishna has stated, “He drank his milk from a brimming cup.” This means that he had both jnanam and bhakti in his possession, to say the least. This wisdom chart reveals the breadth and depth of character that Janaka evinced, and the way he proceeded to overcome the ignorance that occupies the human mind until the full dawning of nondual Awareness made its appearance within him. His song, stunned at first, melancholy in the middle, and blissful at the end, exemplifies the stages of growth which the truth-seeking soul moves through on its way to Self-realization. 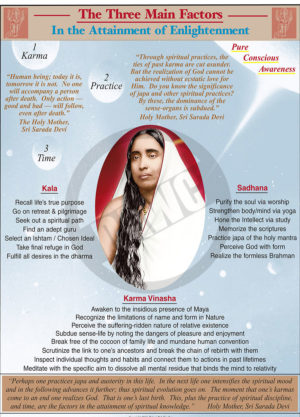 The Three Main Factors in the Attainment of Enlightenment #31

Of the many profound and beneficial utterances spoken by the Holy Mother when She was embodied, the three factors for enlightenment stand among the most important, revealing, as they do, a direct and dependable way for all beings to reach spiritual illumination. And so long as perseverence attends upon the sincere devotee, substantial spiritual progress will come about. This teaching chart provides instructions from Her that will, unlike so many other vaunted solutions of the day, bring one’s hidden karmas to the fore, thereby allowing the aspirant to actually attenuate and dissolve them for all time.
$75.00 Add to cart 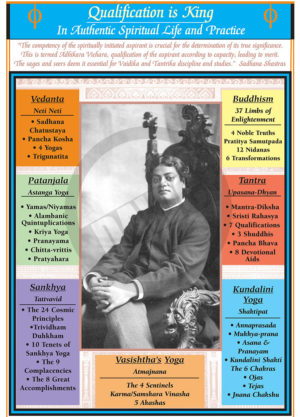 For the consummate spiritual aspirant who desires freedom more than anything else in the three worlds, Mother India’s storehouse of wisdom teachings represent a golden opportunity to qualify oneself in this rarest and most precious of all attainments. For the sincere, adamant seeker, this chart can act as a complete map in the luminous lands of higher wisdom and eternal dharma.
$75.00 Add to cart 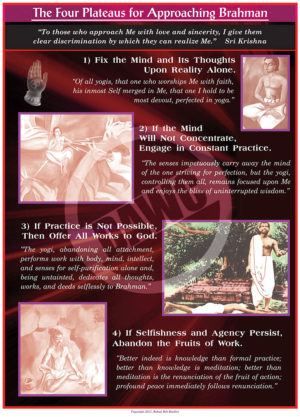 The Four Plateaus for Approaching Brahman #77

Being another fine dharmic teaching from the Bhagavad Gita, these four ways of sadhana are perfect for coming close to God once again, utilizing direct and somewhat unorthodox methods that involve human will power and effortless progress. The Blessed Lord, Sri Krishna, advises the swift coming to terms with the mind and ego, conferring wisdom that is both practical and straightforward. This teaching chart could easily be placed in the Nonduality category of dharmaartwisdomcharts, showing, as it does, the powerful wish of all Avatars that the soul attain to nondual Samadhi and immersion into Brahman, Buddha Nature, or the All-Mighty Father.
$75.00 Add to cart 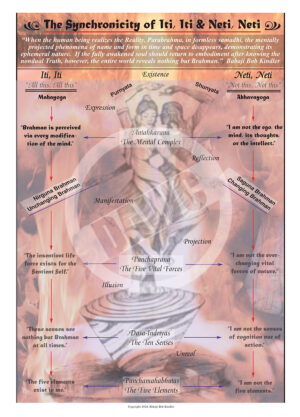 Those fortunate souls who arrive at the darshana of Vedanta in this age, which was freshly reintroduced on earth by Swami Vivekananda starting in 1893, hear several main teachings of import right at the start. One of these cites the discipline of neti neti, which asks the aspirant to look at every element, detail, and object in life, and say to the self, “I am not this; I am not this.” Withdrawal from all that in changing then settles into the mind, and the wonderful station of “Iti Iti,” I am all this; I am all this,” in a newly matured way, is realized. In other words, once the naivete of thinking oneself to be matter is taken away by the practice of neti neti, the soul then perceives Brahman in everything. Then, “Tat Tvam Asi — That Thou Art — is the welcome result.
$75.00 Add to cart