Ancient as time itself, and never to be forgotten, is the divine saga of Sita and Ramchandra related in the revealed scripture, the Ramayana. Much like Lord Buddha much later in time, Ram returned from a journey outside the walls of his father’s palace, but did so possessed of a remarkable transformation. For, he had seen suffering close up in the people of the land, and was hard put to deal with it. When the time was ripe, however, his father arranged for a gathering in the Great Hall under the auspice of which the young luminary expressed his deepest feelings about the world-bewitching maya — the details of which are revealed on this dharma art wisdom chart. 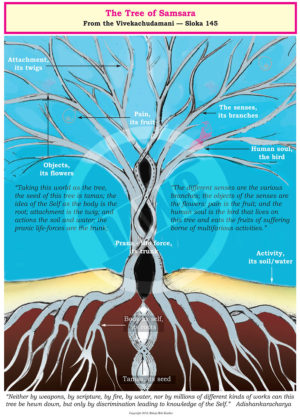 As a companion chart for #295, The Sword of Discrimination, both wisdom charts being teachings springing from Shankara’s great scripture, Vivekachudamani, this dharma chart shows a tree of a different variety than that of the famous Tree of Yoga. Samsara, also called maya, is stultifying, and can easily trap the incarnating soul in a web of both illusion and delusion. Complex to infinity, samsara is treated by this great luminary by placing its main characteristics in a more simple setting, to make it easier for the seeker of Freedom to detach from it. For, as the Great Master said: “Never identify with maya, study it from a distance.”
$75.00 Add to cart 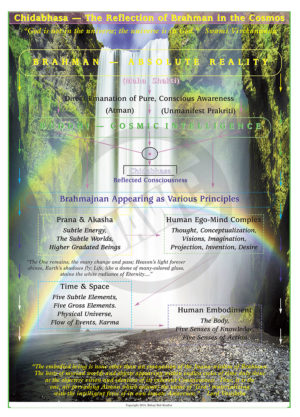 Chidabhasa: The Reflection of Brahman in the Cosmos #240

One of the major stumbling blocks to full comprehension of Advaita Vedanta is the insistence of the human mind that God/Brahman is in the world, i.e., that nondual Awareness is somehow locked into and inseparable from matter. This misconception is usually fueled by human emotionalism, and is left unchecked by dualistic and fundamentalistic religion of the present day. The teaching of Chidabhasa from the Vedantic perspective comes to the rescue here, explaining how Divine Reality can be said to reflect in nature, and to associate with forms, but never actually becomes matter or living beings. It is pure Being, not subject to becoming. This understanding leaves God/Brahman free of all limitations, as It is. It also allows for the embodied soul to seek that freedom beyond matter and its decay, which is was born to do.
$75.00 Add to cart 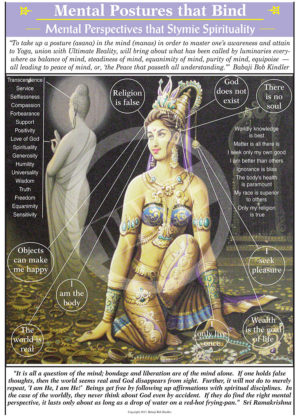 In tandem with dharma chart #187, which teaches about positive mental postures that the practitioner can attempt to attain and develop, this wisdom chart cautions the seeker as to detrimental positions of the mind that it may still be holding, even habitually, even to the slightest degree. Shown here are several of the common harmful perspectives which living beings allow to occupy their minds and thoughts, most of them having to do with attachment to matter and worldliness. Rebirth in ignorance, over cycles of time, is the reward for such crass and limited thinking, and the suffering that invariably accompanies it.
$75.00 Add to cart 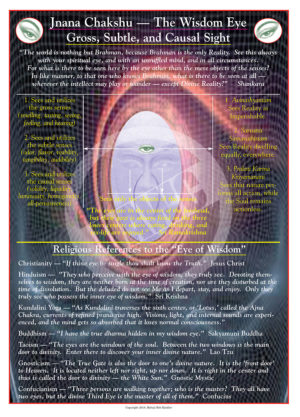 Known generally in spiritual circles and among preceptors and aspirants alike as the “Third Eye,” the center between the brows hold special significance in several of the religious tradition of the world. Specified as the Jnana Chaksu by Sri Krishna in the Bhagavad Gita, and as the Ajna Chakra in the Kundalini Yoga system, the real reference is to a single eye that sees inwardly all the way to the heights of Nondual Awareness. This dharma chart sets off the third eye in contrast to the physical senses, the subtle senses, and the All-seeing Eye that transcends the senses. Quotes from many religious traditions and luminaries complete the picture.
$75.00 Add to cart