Skip to Main Content
Back to Sankhya Yoga & Indian Cosmology
View cart “The Twelve Higher Spandas of Shaivism #143” has been added to your cart.

There is what is called the known universe, wherein beings sport on the physical plane alone using the five outer senses attached to matter and objects. For a few observant beings there is also an unseen universe, which means all that still falls within the physical world, but is too tiny to detect with the five senses. Rarer still, however, are those hidden inner worlds which only a few, choice beings perceive, they existing beyond the earthly realm and viewable only with the five subtle senses and the inner eye of wisdom. Then, unfortunately, there are the worlds of travesty (hell on earth) belonging to greedy and hateful warlike beings, who turn what is potentially beautiful to be seen into what is obscene. On this wisdom chart are listed elements of all four of the levels described herein. 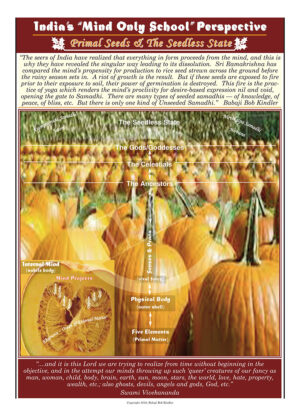 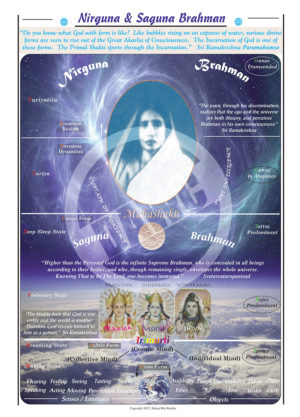 God with form, and God without form, is a fascinating subject. Along with bondage and liberation, it is also one of the subtlest dualities to meditate upon. Few beings spend any time concentrating of formlessness; there are just too many allurements in the realms of name and form that are more attracting. Such beings would rather “eat sugar than be sugar,” as the philosophical term states. But the knowers of formless Reality respond that these souls do not know the Bliss of being sugar. Whatever the case may be, pondering Reality beyond attributes (gunas) while experiencing that selfsame Reality with attributes explains the bliss of the realized soul. From Brahman, to the Trinity, to the realms of higher and lowers deities, and all the way out to the physical universe, the Light of Divine Awareness shines. It is all a matter of how many or how few coverings are in the way of the seer of Truth.
$75.00 Add to cart

The Meaning of Maya, & A Subtler Look at Panchakarana #108

In this age, Swami Vivekananda has brought crystalline clarity to the subject of Maya and what it means. It is five fold, i.e., name, form, time, space, and causality. Other forms of five pepper its inner and outer regions as well, and if they are studied and known, this esoteric knowledge will carry the transmigrating soul to new levels of spiritual awakening. The Mother of Maya, Mahamaya, will become pleased with the devotee who strives to pierce through the veils of nescience and arrive blissfully at the farthest shores of nondual Awareness.
$75.00 Add to cart 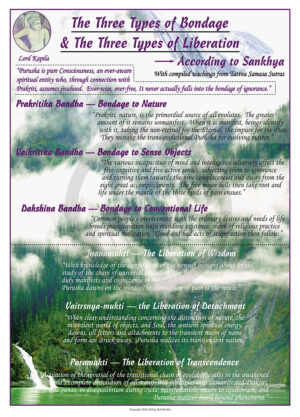 The usage of key Sanskrit words in the Vedanta philosophy illuminate the life and mind of seekers of Truth. For instance, moksha and samsara, namely freedom and bondage, are both veiled from the gaze and thinking of humanity in general. That is, many do not know they are actually in bondage, and of those who do, they have little idea of the possibility of gaining freedom. This wisdom chart from Lord Kapila’s teachings in Sankhya Yoga make all this perfectly clear by revealing the three types of bondage, along with the three types of freedom. Via such an informative teaching, living beings can discover what binds them, and follow through to select the mode of practice that will set them on the path to freedom.
$75.00 Add to cart