The Three Bodies Comprising the Nonself #63

Unknown to most living beings on this earth today, the human being has three bodies, not just one. Even to merely entertain this idea will begin to break down mental and psychological barriers and open up doors to higher wisdom, while to take it up as a subject for ongoing and extended meditation will, over time, help release the embodied soul from attachment to all forms, leading to Freedom. Preoccupation with both the idea that one is the body, as well as remaining unaware of the existence of a subtle and a causal body that one experiences in dream and deep sleep, are the causes of avidya, or ignorance of one’s true nature, or Atman, beyond all bodies. The Eternal Way leading to Ultimate Reality is thus paved by the three paths of knowledge of the three bodies, and their inspection in deep meditation. 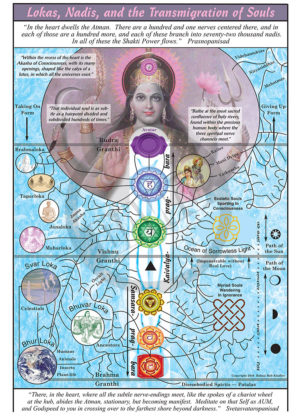 Lokas, Nadis, and Transmigration of Souls #20

Lokas are vast inner realms, described as kingdoms of heaven within, akashas, and bardos, etc., by illumined beings who sport a well developed internal life. Nadis are the abundance of channels running through all lokas, along which course departing and arriving souls in and out of a complicated confluence of concourses, borne here and there by the flow of dynamic spiritual energy called Kundalini, or Shakti. If the outer physical world is replete with an endless series of paths, roads, highways and biways, how much more vast and spralling are the inner worlds, which are truly like “Chambers in our Father’s Mansion.” The intrepid spiritual wayfarer meditates in order to come to know these blissful worlds, all nestled in the Great Mind of God.
$75.00 Add to cart 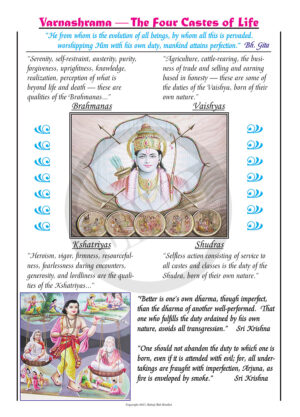 Varnashrama — The Four Castes of Life #301

Being the world’s most well-ordered, effective, and long-lived cultural system, the four castes of India saw millennia of perfect order and synthesis. Though more modern times has seen a decline in that ancient order of castes, it nevertheless remains an exemplary model for how to live together as a race and culture in this world. This dharma chart defines the castes, and offers quotes from Sri Krishna on the qualities and duties of all of them.
$75.00 Add to cart 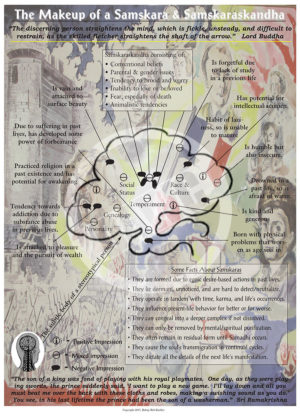 The Makeup of a Samskara & Samskaraskandha #129

As a closer look into the consistency of a samskara, and as a partner dharma chart with #128, this teaching takes apart the contents of a mental impression to reveal what it is made of and what gives it its power over the human being. Further, a skandha, or conglomeration of samskaras, is examined as well, shedding light upon what prompts the embodied soul to take bodies, specific genders, families, lifestyles, careers, and why those souls with heavy karma tend towards bondage in samsara and never seek knowledge, peace, bliss, and freedom.
$75.00 Add to cart 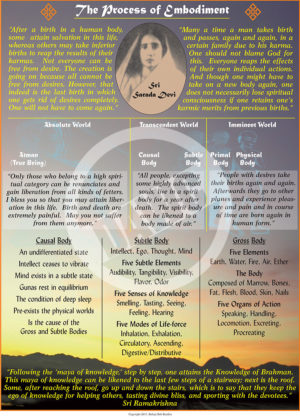