The True Meaning of Siddha — Perfection #109

The Sanskrit word, Siddhi, has several meanings, and these have confused the unenlightened ones who, as yet, are uninitiated into the secrets of spiritual life. Some may take it as something to be physically imbibed, like an intoxicant. Others, of metaphysical leanings, may interpret it as meaning occult powers that can bring unusual forces under the control of the seeker after power. But adepts and luminaries know that Siddhi is absolute perfection. This artistic wisdom chart poses two choices, side by side, for the consideration of discerning aspirants everywhere, and in every religion. For much of religion’s downfall can be traced to preoccupation with the occult, with miracles, and with sensationalism. There is a much better choice, as the teachings of Sankhya Yoga and Vedanta reveal on this dharma chart. 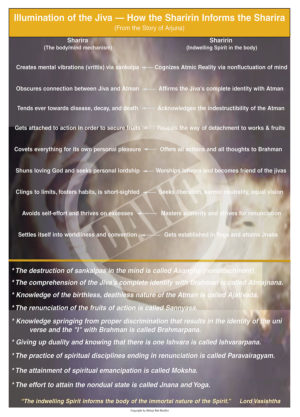 Illumination of the Jiva #277

The Sharirin is the Light of conscious Awareness. The Sharira is the composite of insentient principles like the body, senses, and mental complex. To live a well-informed life, a true and beneficial existence on earth in the body, is to open up the mind and its components and potential powers to the inner voice of the Sharirin and pay heed. In this wisdom chart, this feat is being described in no uncertain terms, allowing the dull and restless mind the alternative of transforming itself into “an image of the Spirit.” Studied in tandem with chart #272, all the avenues leading to and from ignorance are blocked off completely, leaving the now purified mind steeped in samadhis of knowledge, and higher.
$75.00 Add to cart 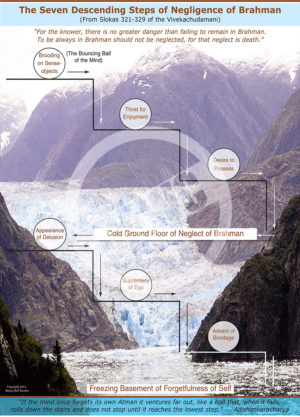 The Four Descending Steps of Negligence of Brahman #43

Though mankind’s nature is perfect, or “divine,” living beings do not know and experience It until they have purified the body, mind, and senses and realized the Atman. This can only be accomplished by spiritual practices. Along the way of this overall discipline, forgetfulness of the underlying “Ground of Existence” must be guarded against until remembrance of this inner perfection comes to the fore and becomes natural once again.
$75.00 Add to cart 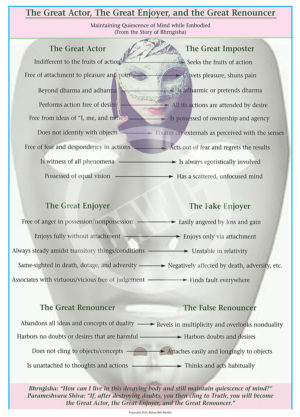 In yet another story from the sacred scripture, Yoga Vasishtha, a clear and direct lesson in dharmic life is delivered via this wisdom chart, free of reservations. It describes in threefold fashion how the adept luminary, once having been a sincere practitioner, lives freely after attaining a station of consciousness that is beyond acts laced with agency, above all pleasures enjoyed for personal satisfaction, and transcendent of thoughts that still believe that the worlds of name and form in time and space are somehow real. He/she becomes “great” in all three of these modes, even though it may appear to others that ordinary life still goes on, on the outside.
$75.00 Add to cart 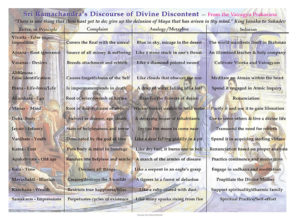 Ancient as time itself, and never to be forgotten, is the divine saga of Sita and Ramchandra related in the revealed scripture, the Ramayana. Much like Lord Buddha much later in time, Ram returned from a journey outside the walls of his father’s palace, but did so possessed of a remarkable transformation. For, he had seen suffering close up in the people of the land, and was hard put to deal with it. When the time was ripe, however, his father arranged for a gathering in the Great Hall under the auspice of which the young luminary expressed his deepest feelings about the world-bewitching maya — the details of which are revealed on this dharma art wisdom chart.
$75.00 Add to cart