Though distanced from one another by some 54 generations of migration, both Zen and Advaita hold and express many similar insights, all springing from a long, slow philosophical maturation over centuries concerning a focused interest upon the highest nondual elements of Divine Reality. This helpful wisdom chart demonstrates, through powerful words in both Sanskrit and Japanese, the correlations between truth principles that were realized by both Indian rishis and Japanese roshis along this winsome way of philosophical and terrestrial time-travel, helping all beings to comprehend the unity of all religions. 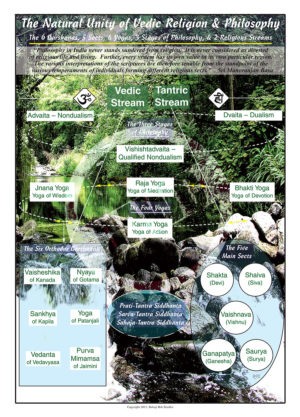 The Natural Unity of Religion & Philosophy #158

A veritable host of paths, lineages, sects, yogas, and darshanas embellish Mother India’s collection of sacred systems. Therefore, it is helpful and handy have access to the names and methods of them, in order to provide the seeking mind with both knowledge and inspiration along the spiritual pathway. This dharma chart offers such beneficial provision to the sincere soul, all placed in a context that also lays out the level of philosophy that each one occupies in the realm of consciousness.
$75.00 Add to cart 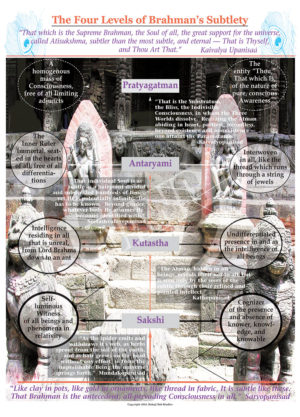 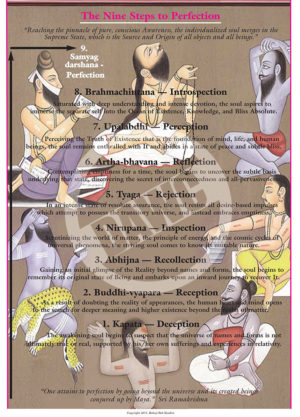 The Nine Steps to Perfection #120

Sadhana, as understood by beginning and intermediate practitioners, is mostly a matter of body, prana, and ritualistic worship. When it becomes obvious after a time that the mind will need its own form of practice, more subtle elements are called into play. The inward journey really begins here, for the “kingdom of Heaven” as it could be called, is most certainly within. The mind, with its thoughts, intellect, and ego constituents, are these inner territories. When they are detected, explored, and refined, all manner of exquisite experiences, like samadhis, come forward. For those whose main path is one of wisdom, this chart lays out the dynamics of a mind that is making itself perfectly qualified for the singular experience of ultimate Samadhi, called Nirvikalpa.
$75.00 Add to cart