Skip to Main Content
Back to The Word & The Revealed Scriptures

Missing throughout the ages in religion, and abiding undetected in the deeper reaches of the human mind, the truth of “This Self is Brahman,” or “I and my Father are One,” is rendered unable to transmit its transforming and revivifying effects on the consciousness of embodied beings. Only a few rare souls — those who dive deep into the ocean of conscious awareness to uncover this supreme secret — reap the benefits of Its power,
coming forth to declare to all who would open their ears, that the apparently individualized soul is really the Supreme Soul. Certain powerful utterances have emerged over time that bring this incomparable realization of the “Self in All” into the realm of aural expression, albeit with an necessary economy of words. The Mahavakyas accomplish this, along with a host of other pithy declarations that lead the soul to a long-awaited understanding of its own Divine Essence. 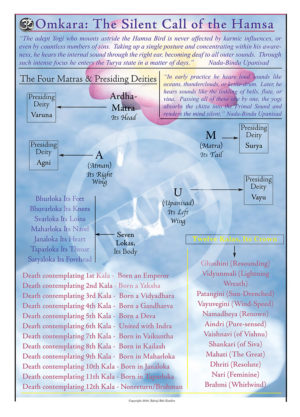 The Hamsa, the swan, holds a particularly powerful and symbolic place in the vast scheme of India’s religious and philosophical pathways. Even beyond the esoteric teaching from the famous story of its abilities to separate the water from milk, i.e., the admixture of worldliness from Pure Consciousness, its relationship with The Word and all that it signifies also comes forth for contemplation — as the dharma art wisdom chart displayed here offers up for rapt and due inspection.
$75.00 Add to cart 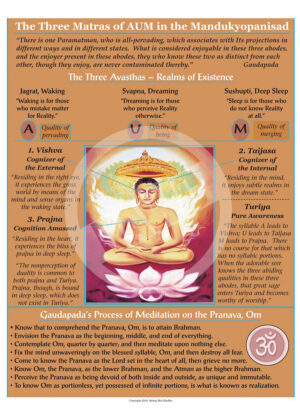 The Three Matras of AUM in the Mandukyopanisad #287

One of the simple but simply profound teachings of Advaita Vedanta involves taking the deeper meaning of AUM, The Word, and splitting it into the matras of its three letters, A, U, and M. Upon due contemplation of this internal spiritual act, it is seen that all that exists falls within these three partitions of Consciousness. Making this simpler still, the states of waking, dreaming, and deep sleep are applied to the three matras as well, revealing that all and everything in existence lies within the Soul/Awareness of mankind. Knowing this, the seeker can then connect the three matras into one, realizing in the process that by leaving them separate from one another, the soul will wander the three worlds in ignorance of the Truth, unaware of its own true nature.
$75.00 Add to cart 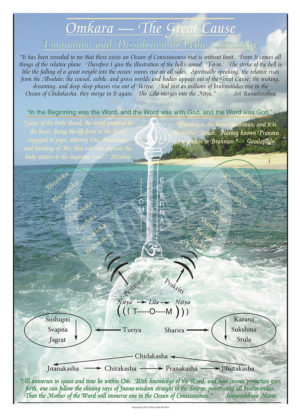 Divine Reality, which is formless Essence, is causeless. So whence and from what sprang all the worlds of name and form in time and space? From The Word. As Jesus stated, “In the beginning was The Word, and The Word was with God, and The Word was God.” In this context he was speaking in terms of beginnings and endings, of all that comes into being via the duality of cause and effect (karma). Sri Krishna clarifies further in the Bhagavad Gita by stating that there are no beginnings, middles, and ends in Brahman. It is Timeless and Eternal. On this dharma chart are to be seen several of the cosmological processes that occur out of The Word, and it is to be presumed that Divine Reality, Brahman, stands by as these come forth, observing the play, but remaining ever-perfect, beyond all transitions, transformations, and transmigrations.
$75.00 Add to cart 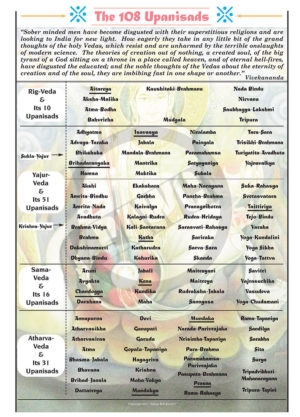 Pure, distilled essence from the illumined minds of the seers of Mother India, the 108 upanisads are Vedanta personified. This rarified wisdom, of nondual type, is eternal. It was gleaned by intense practitioners and profound meditators whose time was dedicated to ages of devout rituals, centuries of blissful chanting of devotional songs, timeless concentration and distillation of sacred mantrams, and millennia of deep forest contemplations away from the chaos and confusion of worldly human beings. The Upanisads contain all of this and more — burgeoning into our own age free of text-torturing, scriptural misinterpretation, and religious narrowness.
$75.00 Add to cart