The Twelve Higher Spandas of Shaivism #143

In early times in India, when it as called Bharat — the Eternal Land — Lord Kapila did his inner homework through intense scrutiny of all that lies both inside and outside the individual’s marvelous province. He came up with the Twenty-Four Cosmic Principles that not only effectively distilled and mapped out these two terrains of a human being’s relative consciousness, but were also borrowed by so many other systems of Cosmology and Philosophy — both inside and outside of Mother India. Shaivism was one of these, with its keen and authentic worship of Lord Siva. To the Cosmic Principles of the Sankhya system of Lord Kapila, the Shaivites added twelve deeper or higher levels of vibration, completing a grand 36 Cosmic Principle tier that opened the aspiring sadhika’s exploration of the “kingdoms of heaven within” to subtleties unknown to most seekers of Enlightenment 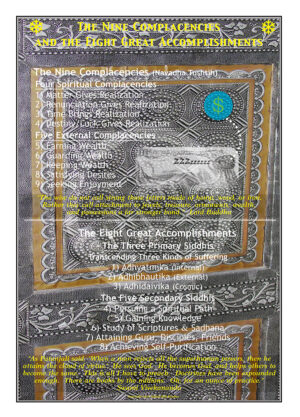 In a beautiful rendering of key elements of the ancient Sankhya philosophy, much of which is lost to present day humanity, this two-sided teaching gives out the do’s and dont’s of the spiritual pathway in a succinctly effective manner. Complacencies are weights upon spiritual progress, and true to form according to many of the world’s religions, Sankhya Yoga reveals how wealth can be a real bane on the higher goals of meaningful life. On the opposite hand, accomplishments are the joys of inner striving, and those mentioned on this dharmic wisdom chart form an essential list of them.
$75.00 Add to cart

The Thirty-Six Cosmic Principles of Shaivism #148

Utilizing Lord Kapila’s original twenty-four tattvas as its basis, the various philosophy schools inside of the darshana of Shaivism have fashioned an umbrella of subtle principles over the top, a sort of frosting on the cake of Indian philosophy in general. But much more than a sweetening, the upper twelve tattvas cover a range that had remained hitherto unexplored by most inner travelers of the terrain of consciousness. What was revealed as a result came in the form of vibrational fields too subtle for the mind to fathom through rationale and speculation. Contact with such ultimately living principles as Ishvara and Sadasiva brought to the fore the very meaning of direct darshan with higher deities that stretched far beyond mere visualization. Even a basic study of these spandas alerts the mind to their existence, opening up close relations in the near future.
$75.00 Add to cart 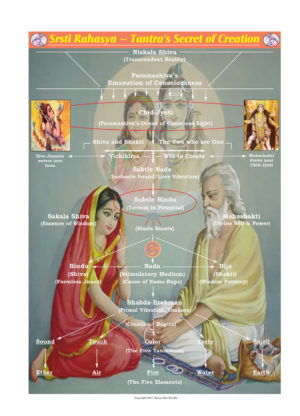 All of the religious traditions of the world possess some system or ideology that proposes what the origins of life are and where they come from. Of them all, India stands out and is head and shoulders beyond the others, mainly because its cosmology is both sensible to the intellect and philosophically sound. In India’s well-thought, deeply meditated systems of cosmology there is no conjecture based in hope or sentimentality, no faint-hearted appeal leveled towards attracting the soul towards the phenomenal and the occult. There is no force utilized based in fear of damnation or alienation. There is no immortality, either on earth or in heaven. There is just the Eternal beyond them both. Mother India has many darshanas, clear pathways to Freedom, and these the Divine Mother reveals to souls seeking the highest Refuge. With any one of these, like Tantra’s Srsti Rahasya, Origins both physical and spiritual will be plumbed, resulting in the full understanding of the presence and meaning of all worlds and the beings who abide in them.
$75.00 Add to cart 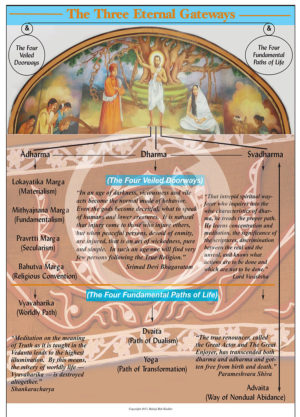