Skip to Main Content
Back to Meditation
View cart “The Six-fold Process of Immersion in Brahman #44” has been added to your cart.

When human consciousness gets limited to the physical plane alone, its vast and beneficial potential becomes imprisoned in a world of mundane, superficial preoccupations. Lost to its awareness are the many attributes and abilities that transcend the passions, fetters, and obstacles faced by the soul trapped in maya, and who suffers without a remedy thereby. Illiumined souls are ones who learn the art of being a “Walker of the Skies, which has nothing to do with the poisonous occult power of levitation, but rather with going within to visit the “Chambers of the Father’s Mansion” within the vast reaches of the infinite human Soul. 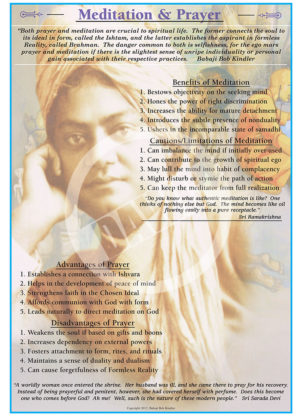 These two mainstays of spiritual practice, around the world and in different religious traditions, are utilized by living beings in connection with their spirituality. It could be said that they suit two different types of temperament among seekers, like the contemplative and the devotional. When they are examined from a philosophical view, it becomes clear that both have benefits and drawbacks for the earnest practitioner. Therefore, better than a comparison between the two is an application of both into spiritual life, with an eye towards rounding out human character. The dharma teaching contained within this chart allows the devotee and practitioner to do just that, revealing the fruits and the potential pitfalls of these two universal occupations — all laid over a backdrop of a rare painting of Swami Vivekananda, who was a past master of both.
$75.00 Add to cart 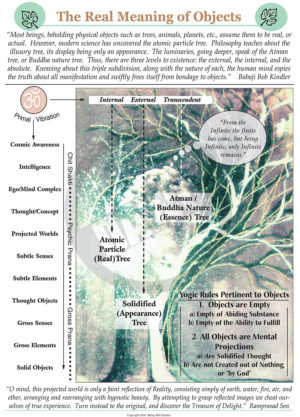 The Real Meaning of Objects #18

Basically, there are two facts about the existence and presence of objects that most beings do not know: first, that they are pointers to the existence of what generated them; and two, that they consist of intelligent particles, not just atomic ones. In other words, they are “thought made manifest.” Once all this is known, along with a few other pertinent facts about them (such as their inability to fulfill or satisfy the human soul), then all here can be seen as nothing less than the expression of Brahman, and attachment to gross objects will become a welcome thing of the past.
$75.00 Add to cart 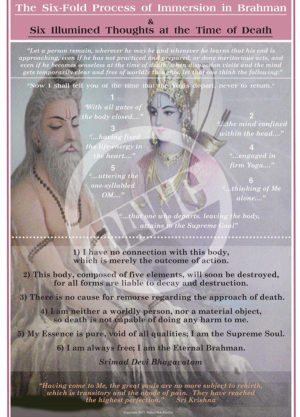 The Six-fold Process of Immersion in Brahman #44

The transmigrating human soul will leave the body at some time or another, whether it be in the deep throes of profound meditation or at the time of its last day on earth. The important thing here, in this inevitable shift of awareness, is what state of consciousness it has reached by the time of its last breath in the body. The teachings of both the Wisdom Goddess, and of Her spiritual son, Sri Krishna, rush to secure the condition of a balanced state of mind in all such profound and difficult moments, providing stability and fearlessness in the face of the advent of all types of formlessness.
$75.00 Add to cart 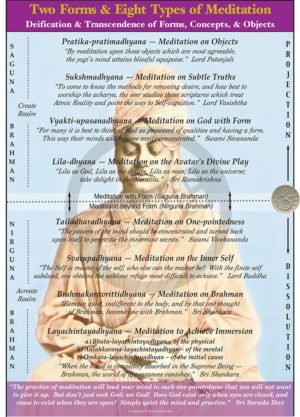 Precious little is known about meditation today, particularly around instruction for its practice. Striving beings therefore receive very little guidance in it, and often have to enter inner states of consciousness without direction or orientation. What is more, a general confusion exists around the options and variations available to practitioners in meditation practice, many of them listed here on this dharma art wisdom chart.
$75.00 Add to cart