Other than his worship as a favored deity, and even other than his identity as a member of the Divine Trinity, Lord Siva’s unknown and unheralded work called the Four Padas is of great import to the worlds of name and form. It would be doing the Lord of Gods a disservice to call him the God of Wisdom, then not know the reason for this honorable title. In this dharma art wisdom chart, both his dedicated works and his two facilitatory powers are revealed for contemplation by all beings who desire to come to know him more fully. 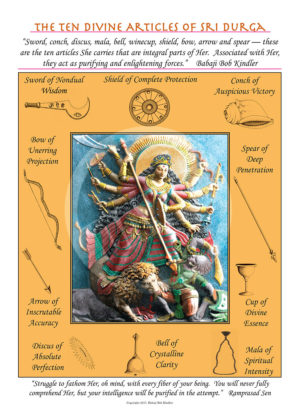 The Ten Articles of Sri Durga #320

Created after the book by the same name, this dharma art wisdom chart both reveals the Goddesses powerful weapons against ignorance and explains their deep symbology as well. In addition, it encourages all devotees to borrow these tools of Truth-revelation directly from the Goddess Durga via study and meditation, and use them in life in order to bring about a full expression of the very best that embodied existence can offer. Then they will act as purifying and enlightening forces.
$75.00 Add to cart 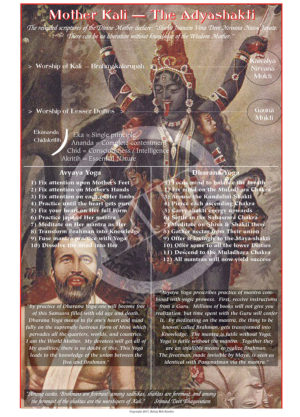 It is proclaimed by Vedic and Tantric adepts alike that the Divine Mother of the Universe has five main aspects, known as Prakriti Panchaka in Divine Mother scriptures. At the head of these five aspects is Mother Durga, also seen as Mother Kali. She is the Mother of spiritual transformation. Beings who worship Her are not in the body for purposes of enjoyment, wealth, powers, or even sporting in consciousness — in the “many fields of the Lord.” They are present to master awareness and unite it with Her in the highest nonduality. Mother Kali, in Her scripture, The Srimad Devi Bhagavatam, cites two specific pathways along which this ultimate goal can be accomplished. They are Avyaya Yoga and Dharana Yoga, and Her instructions about them grace this dharma art wisdom chart — along with a stunning image of Her and Her precious son, Sri Ramakrishna Paramahamsa.
$75.00 Add to cart 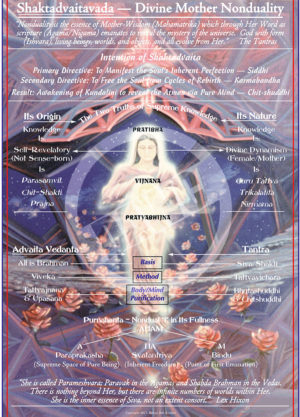 No matter what the religion, what the philosophy, or what the pathway beings choose in order to get the soul free from suffering and matter, they all go better and reach their highest zenith if awareness of the Divine Mother of the Universe is acknowledged and adhered to. This being the case, imagine, then, the peaceful, blissful, ever-content state of Consciousness enjoyed by those who take Her as their main and very own Ideal, perceiving Her as the underlying power of being and the potent force of intelligence behind all ways leading to Truth. Shaktadvaitavada — both the word and the way — emanates pure knowingness and beingness, as cogent explanations of it found in this dharma chart reveal. As the profound Upanisads relate, “These scriptures represent the secret doctrine, and She, Herself, is the Secret.”
$75.00 Add to cart 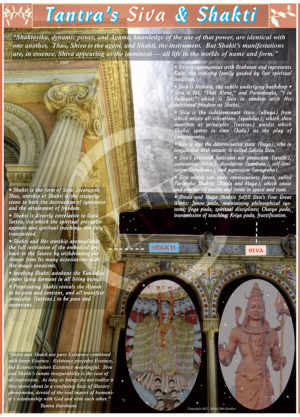 From the masculine and feminine power that resides in all species of nature, through to the divine emanation of the gods and their spiritual consorts, Siva and Shakti embody them all. Like the sun and its rays, the healing power in herbs, and the presence of heat in fire, this Primal Couple are directly responsible for the appearance of the many worlds in time and space, the objects that occupy these infinite realms, and the abundance of living beings who inhabit them. And this is only a small part of Their secret, the remainder to be fathomed and blissfully imbibed by Their loving devotees and shining luminaries in heartfelt worship and deep meditation
$75.00 Add to cart