As nondual Reality reveals more and more of Itself to the limited but expanding human mind, it becomes clear that Consciousness holds within its vast regions some stellar and stunning atmospheres that can only be fathomed by the most elevated and masterful of realized beings. Sublime titles and scriptural slokas indicating these overlapping divisions are to be found on this dharma chart, to aid the human mind in comprehending a little of its own pure and pristine Awareness. 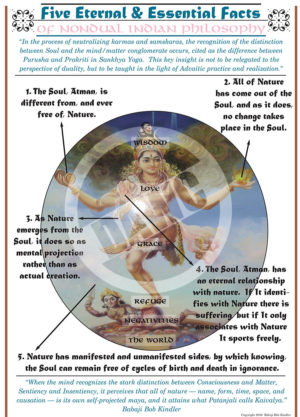 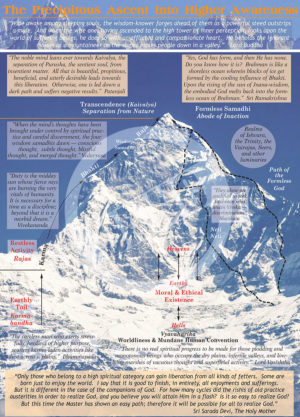 The Precipitous Ascent into Higher Awareness #23

In addition to certain fast and firm principles, Advaita, Nonduality, also has several well-mapped out avenues that lead to its timely consummation in the human mind. There is the longer, slower ascent of sythesizing the Yogas; there is the path of outright negation that simply strips away all that is illusory; and there is a pathless path uitlized by past masters when they choose to embody for some important reason. Whatever the road inward may be, or entail, a copious and well laid out map is a helpful and needful tool for those few who are entertaining the highest spiritual vision, and beyond.
$75.00 Add to cart 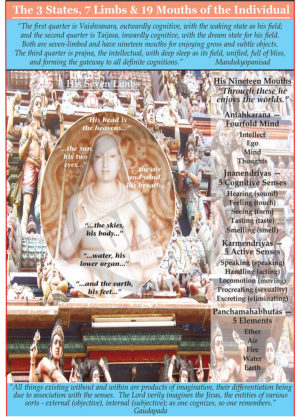 The most advanced spiritual luminaries declare unanimously that “All is Brahman.” When they state this great Truth they mean it transcendentally, but they also intend that it be taken literally and immanently. This chart explains how the apparently individualized soul, the jivatman, is really the Supreme Soul, Paramatman; jiva is Siva! It may shift its locale in awareness when it visits dream and deep sleep, and it also consumes and exudes the natural world while in the waking state — all with its 19 mouths. Considering the individual, or oneself, in this unique and more enlightened way, the chasm between God and mankind can be breached, and the unity of “I and my Father are one,” or “Tat Tvam Asi,” can be realized. This is the best of informed cosmology and all-pervasive nonduality.
$75.00 Add to cart 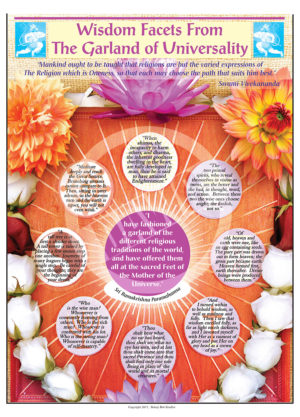 Wisdom Facets from the Garland of Universality #159

The current saying that states that “All religion is indigenous to the Soul” receives both well-deserved attention and further proof and validation in this revelatory dharma chart on the Eternal Principle of Universality. A dedicated and open-minded study of all the revered religious traditions of the world will turn up many gems of wisdom such as these, disproving the narrow-minded and one-sided assumption that only one religion is true, and the rest are false.
$75.00 Add to cart